The Business History of the Tayloe Family and Virginia's Gentry, 1700-1860 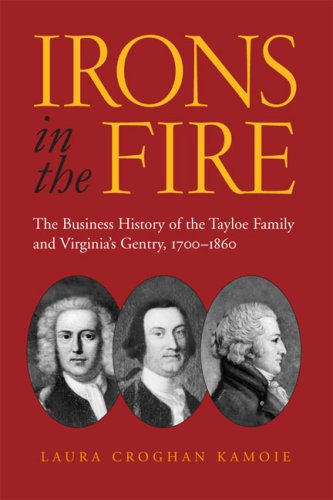 Irons in the Fire chronicles the agricultural, industrial, and commercial activities of four generations of the Tayloe family of Northern Virginia, revealing a greater complexity in the southern business culture of early America than scholars have generally recognized. Through the story of one representative family, Laura Croghan Kamoie illustrates how entrepreneurship and a broadly skilled slave-labor force combined to create economic diversification well before the American Revolution. Contrary to general historical perceptions, southern elite planters were, at least until the 1790s, very like their northern counterparts.

The Tayloes were planters and businessmen who, crucially, saw no distinction or conflict between these two roles. In this they were not unique: diversification, combined with an entrepreneurial inclination among the elite of the planter class, formed the basis of the Chesapeake’s regional economy and contributed to its development.

This diversity was reflected in the slave community. Demonstrating a versatility exceeding later generations of slaves, and occupying a central position in the daily operations of the South’s business culture, the Chesapeake slaves made the planters’ relatively sophisticated enterprises not only profitable but possible.

Spanning more than a century of early American history, the story begins in 1700, when John Tayloe I managed the family’s concerns, and concludes with his six great-grandsons, who lived into the Civil War era. Through the generations, the Tayloes demonstrated the same essential qualities--enterprise, risk-taking, business savvy, innovation, ambition, and pursuit of profit--as their northern counterparts. As the eighteenth century ended, however, cotton plantation agriculture--and, in Virginia, the internal slave trade in support of it--increasingly began to take over, working against economic diversification.

Irons in the Fire provides an exceptional view of early American business, each generation of Tayloes approaching the family’s welfare within the social, political, economic, and cultural contexts of their day. This business-family saga also contributes a pivotal perspective to contemporary debates about the economic modernity of the South.

One of the most well-researched economic studies ever undertaken on the early modern South. Kamoie has demonstrated beyond a doubt that the Tayloes were diversified businessmen, who dealt mainly in agriculture, but who were also open to an array of commercial and industrial activities, an array which changed over time. Irons in the Fire makes a very significant contribution to the economic history of early America.

This website uses cookies to improve your experience while you navigate through the website. Out of these, the cookies that are categorized as necessary are stored on your browser as they are essential for the working of basic functionalities of the website. We also use third-party cookies that help us analyze and understand how you use this website. These cookies will be stored in your browser only with your consent. You also have the option to opt-out of these cookies. But opting out of some of these cookies may affect your browsing experience.
Necessary Always Enabled

Any cookies that may not be particularly necessary for the website to function and is used specifically to collect user personal data via analytics, ads, other embedded contents are termed as non-necessary cookies. It is mandatory to procure user consent prior to running these cookies on your website.