Apr03 Comments Off on New Release: My Dear Hamilton is Now Available! 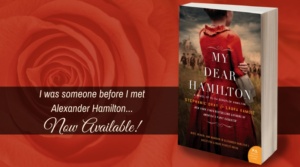 Dear friends! I’m just thrilled to share that my second historical novel is now available! My Dear Hamilton tells the epic and largely untold story of Eliza Schuyler Hamilton, one of our most storied Founding Mothers. If you enjoy history, historical romance, or Hamilton: An American Musical, I think this is a must-read for you! Here’s everything you need to know:

✭✭✭About My Dear Hamilton: A Novel of Eliza Schuyler Hamilton:

Wife, Widow, and Warrior in Alexander Hamilton’s Quest For a More Perfect Union

Thanks for reading! And I really hope you’ll grab your copy!